Save A Shore Farmer

WASHINGTON TO IOWA FARMERS: “SUCK IT UP” 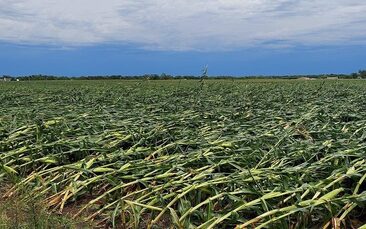 The 100-mph winds of a recent “derecho” that hit Iowa farming country damaged 14 million acres of corn and soybean crops according to the USDA. Fifty-eight thousand farms were affected. Farmers have been struggling for years with low commodity prices, starting with the impact of the China trade wars, and now complicated by low demand for ethanol as more people work from home.  A third of the Iowa crop is used to produce ethanol.
Iowa is many miles from Maryland, but the impact of the derecho will spread far beyond the corn belt. Consumers can expect fuel and food prices to increase.  Because much of the destroyed corn crop in Iowa was intended to produce seeds for the next growing season, farmers can expect higher seed shortages and higher seed prices.
A federal major disaster declaration approved Monday does not include financial assistance for Iowans recovering from last week's devastating derecho, despite President Donald Trump tweeting he approved the state's application in "FULL."
Gov. Kim Reynolds' request for $82.7 million to cover the 8,273 homes that were damaged or destroyed was not approved. Neither were her requests for $3.77 billion for agriculture damage to farm land, grain bins and buildings and $100 million for private utilities repair.
On Aug. 10, a straight-line wind storm with speeds of up to 110 miles per hour ripped through the state, destroying at least 14 million acres of crops, damaging trees, homes and businesses and leaving half a million Iowans without power.
Reynolds submitted a request for $3.9 billion in federal aid on Sunday – about $45 million of which Trump approved Monday. "Just approved (and fast) the FULL Emergency Declaration for the Great State of Iowa. They got hit hard by record setting winds," he tweeted.
Farm4Profit, a national organization devoted to finding ways for farmers to sustain both themselves and their markets, sponsored a series on the impacts of the derecho, including weather, grain production and storage, crop insurance, and the stress and anxiety resulting from the tragedy.  To learn more, visit https://intro-to-farm4profit.simplecast.com/episodes/derecho-farm-impact-report-whats-next-3Oiwv1Jp
MIDWEST FARMERS SEEK WAYS TO DEAL WITH STRESS AND SUICIDAL THOUGHTS
It’s no secret that dairy farmers in particular are suffering, economically and emotionally, in the current agriculture environment.  Commodity prices are way down, and tariffs restrict the industry’s ability to export. Overall, farm families’ income has shrunk by 50% since 2013.  As a result, farm stress is up, and suicide among dairy farmers is on the rise.

Soledad O’Brien, on her Sunday morning show “Matter of Fact,” interviewed Wisconsin farm families and a psychologist who has devoted his professional life to stemming rising incidences of depression, anxiety and suicide.  It’s worth the 5 minutes it takes to watch it.
https://matteroffact.tv/americas-farmers-facing-both-financial-and-mental-health-crises/
Click Here for video Link

When the CDC released the results of a 17-state study that concluded that farmers are at great risk of suicide, one of the first professionals to whom the media turned for confirmation was Dr. Michael Rosman, a mental health professional and farmer in Iowa. Dr. Rosman was not surprised at the data. His practice serves farm families exclusively, and he recognized the stress, the drive, and the risk from helping farmers through difficult times for many years.
But he saw light at the end of the tunnel, that farmers are more willing to confront their demons and seek help. His is perhaps the most compelling explanation of why farmers kill themselves and what can be done to prevent it, because he has worked in two fields: the farm field and the mental health field.  This interview, from Delta Farm Press, is eye-opening:
https://www.deltafarmpress.com/management/depression-continues-hold-farm-country
​

In France, one farmer commits suicide every two days. Dairy farmer Michou from the Loire-Atlantique region agreed to talk about the quiet epidemic that’s affecting his community.
“I’m the one who found him. It was awful. When I phoned him and he didn’t pick up but I saw his car I thought, something has happened to Raymond. Something really bad.” On June 8, 2011, at around 5.45am, Michou’s friend and business partner for 20 years hanged himself on the wooden beams of the barn on their farm. “He tied his hands together, to make sure it worked,” leaving Michou “abandoned and alone”.
Michou, 56, who asked not to be filmed, lives on his own in a small house in the countryside near Nantes. All over the walls are pictures and souvenirs of the Senegalese capital, Dakar, which he visited during one of his rare holidays. On the kitchen cupboard, there is a photo of Raymond at dinner with friends. It reminds Michou of happier times.
In Michou’s town, no one calls him by his real name: Jean-Michel. But they all know and respect Michou, the dairy farmer who was born without his hands but who took on the family farm despite his physical disability.
'What did I not do? What did I not say?' “I asked myself a lot of questions. Was it my fault? What did I not do? What did I not say?” When someone takes their own life, their friends and families face agonising questions. Why that particular day? What could I have done to prevent it?
For farmers in the Loire Atlantique region, suicide has become an everyday matter. “There are lots of suicides,” Michou told us, wearily. “I have a neighbour who committed suicide, and also my cousin is going through a rough time. The pressure to produce, to earn a living, it’s just crazy. And there’s the alcohol too."
Raymond’s suicide was not linked to alcohol. Michou believes it was a culmination of exhaustion, stress and the drought. That year, the animals’ fodder had dried out under the harsh sun.
“We’d just worked 365 days non-stop, getting up every morning at 5am. And at night he would be with the cows during calving too. We went from having 120 cows to 180, and that’s not easy. Each animal still demands the same amount of attention. You can see there was a problem! A real problem!"
Every two days, one farmer in France commits suicide. Dairy farmers have a suicide rate that is 50% higher than France's national average. The problem is most acute in Brittany and the Loire region.
As well as their everyday tasks, farmers also have to care for the animals day and night, all year long. Christmas, wedding celebrations and birthday parties all get cut short, because the milking still needs to be done. The work never lets up.
In this tight-lipped community, Michou has tried to break the taboo linked to mental health. “I always told myself I must not end up like that. And I can tell you, I’ve got plenty of reasons to. So from the start, I got help."
Help is out there. In 2011, the French government delegated the task of developing an action plan to the Mutuelle Sociale Agricole (MSA). A free hotline was introduced in 2011. Counsellors specialised in dealing with suicidal situations man the phone 24 hours a day. So far, they’ve fielded 4,000 calls.
In the Nantes office of Solidarité Paysans, a charity set up more than twenty years ago, we met Isabelle Grégoire, a social worker, and Véronique Louazel, a public health researcher. They’re working with eighty farming families in the local area. Most are in financial debt and need advice and support.
Years of hard, outdoor labour are marked on the faces and bodies of those who have dedicated their lives to farming. Talking about what is inside, opening up about their feelings, is not something many farmers are comfortable with.
“From what farmers tell us, psychological suffering and suicide occur when there’s a feeling of hopelessness, as if there’s no other choice. That could be not being able to pay back a bank loan or pay the vet bill. Why is that happening? Put simply, the price they can sell their produce for is not enough to cover their expenses. And so they work harder, hoping to earn more money. But then they become exhausted. And the debts continue to pile up and they think: ‘what else can I do? I’m working harder but I can’t get out of this.'"
For Grégoire, “the causes are multiple and in addition to the financial reasons, loneliness among farmers also comes into play. The feeling of isolation can lead to suicide."
Social pressure is also a key factor. “There’s the shame, they struggle to admit when they’re in trouble. They don’t want to fail where previous generations have succeeded. So when they ask for help, it’s often very late down the line.”
Michou has decided to retire before total exhaustion takes hold. He hopes to hand over his farm to his nephew. Not for the money, but so that his long hours of labour will not be lost in a wasteland